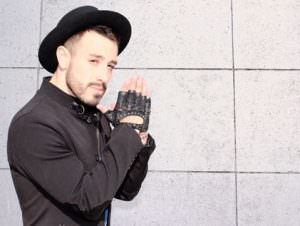 RAYMOND SCOTT PARDUE’s story begins in the small southern town of Booneville, Mississippi. At the age of five Raymond enchanted church-goers with spontaneous a capella renditions of the gospel song “Jesus Loves Me“ and the classic “Amazing Grace“. His talent was noticed and fostered from then on: Together with a group that performed Elvis hits, he toured the Southern states.

The young interpreter first attended the “Youth Performing Arts School” in Louisville, Kentucky, later, thanks to a scholarship, went on to the most renowned US Institute for the Performing Arts, the Boston Conservatory.

This was followed by offers from Europe, where he performed at the Karl-May-Festival and then made Germany his home away from home. He excelled at one of the early casting shows, receiving numerous offers and constantly perfecting his skills as a singer, songwriter and performer.

A first success was his single “Shake It“, released in 2005, which was chosen as the title song for the VIVA show “Dancestar“. Two years later his second CD, “Running” made it into the SWR-radio charts.

Just a short while later he produced his third release together with Grammy-Award-winner DARON JONES (PINK, P.DIDDY, USHER), TONY REYES (CHRISTINA AGUILERA, LEONA LEWIS, SUGABABES, DESTINY´s CHILD, LIONEL RITCHIE) and TOMMY GEE in Atlanta, which was really popular on the internet radio in the USA.

You will be enthralled by RAY SCOTT’s live performances with the KING KAMEHAMEHA CLUB BAND!