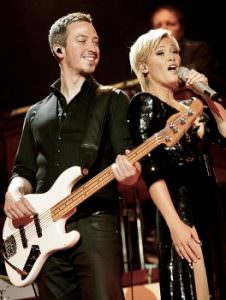 KRISCHAN FREHSE, was immediately all for it when his good old friend Xaver wanted to bring him on board in the KING KAMEHMEHA CLUB BAND.

KRISCHAN’s musical roots are in the piano. As a pianist for a BIG-BAND and various theater productions, he was able to shine and receive prizes at an early age. To be good at one thing, however, was not enough for KRISHAN. So, he quickly made a name for himself as a bass player after studying at the University of the Arts in Arnhem. He also began to conquer the market as a producer and songwriter for various bands and solo artists.

After performing with JULIETTE SCHOPPMANN, MOUSSE T., MAX HERRE, JOY DENALANE, MARSHALL AND ALEXANDER he was offered one of the most desirable and demanding positions in the German world of pop – as the permanent bass player in STEFAN RAABs Studio- & TV-Band „HEAVYTONES“. He was even able to top that, by impressing the team of HELENE FISCHER and accompanying her on her tours throughout Germany.