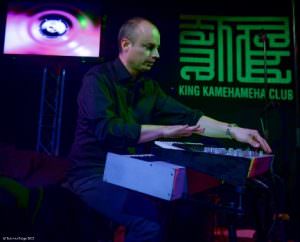 XAVER FISCHER began his career in the nineties as a jazz pianist. With his progressive lounge/nujazz project, XAVER FISCHER TRIO, he released four albums, making it onto the JAZZ CHARTS and bringing him to the MONTREUX JAZZ FESTIVAL. Today the band is considered to be one of the most important pioneers in Germany for live lounge and nujazz music, according to the periodical JAZZTHING.

After the great era of nujazz, XAVER performed as a pop keyboarder, e.g. playing for studio albums of  SARAH CONNOR and GUNTER GABRIEL, performing with the live-band of pop star SASHA for many years, for concerts of REA GARVEY, ROGER CICERO, JOY DENALANE, JAN JOSEF LIEFERS, STEFAN RAAB, among others, as well as in various TV-BANDS (ANKE LATE NIGHT, HARALD SCHMIDT, …).

Then he discovered the field of company events and became a permanent member of the KING KAMEHAMEHA CLUB BAND, leaving his mark over the past few years in the form of a particularly modern sound.

After years of refining his work, XAVER has found a way to reproduce the sound of current dance hits, which were formerly elaborate studio productions, live and with his synthesizers, for which he is renowned throughout the German music scene. Experience the exceptional talent of XAVER FISCHER live with the KING KAMEHAMEHA CLUB BAND!