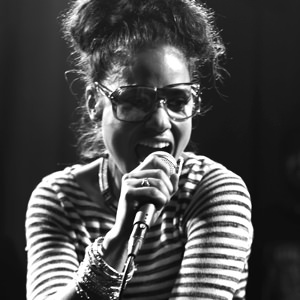 “One could put her in front of an audience of heavy metal fans early in the morning, and they would not drown her out.” (regioactive.de )

The South African-born NICOLE celebrated her first success as a front singer with the cult band “GROOVE GUERILLA”.

Her live performances are so authentic and her voice so powerful that Nicole, originally from South Africa, has been booked at festivals such as “ROCK AM RING“, “ROCK IM PARK“, “SWR3 NEW POP FESTIVAL“ and “MTV CAMPUS INVASION“.

NICOLE was also invited to take part at the WORLD CULTURE FESTIVAL in Istanbul.

This high-powered woman is also the lead singer of the band “SISTERS“ and together with her bandmates is involved in social projects at international schools and conducts workshops.

Feel NICOLE‘s energy during a live performance with the KING KAMEHAMEHA CLUB BAND!