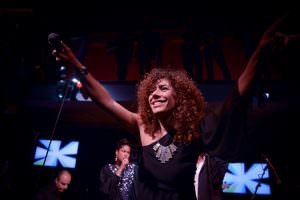 EDITA ABDIESKI has that certain “X – Factor“ – that “je ne sais quoi” that defines an artist.
Shortly before her 26th birthday the live wire from Cologne won the inaugural season of the international and successful talent show “The X Factor”.

The daughter of Macedonian-Montenegrin parents born in Bern, Switzerland, she has performed with XAVIER NAIDOO and released a song together with RICKY MARTIN.

At the age of eleven EDITA started her first band and at 13 wrote her first songs. She won two singing competitions and completed her studies at the Swiss Musical Academy.

In 2006 a Swiss label signed her on and she played the lead in the musical “Dance Me! The Streetdance Musical“.

Four short years later she was signed on by Sony BMG. After the release of her album “One” (2011) EDITA received the DIVA-Award in the category “Talent of the Year“ and in 2012 the FAN-AWARD for best female vocalist.